Top 9 Hidden Treasures in India You Must Know 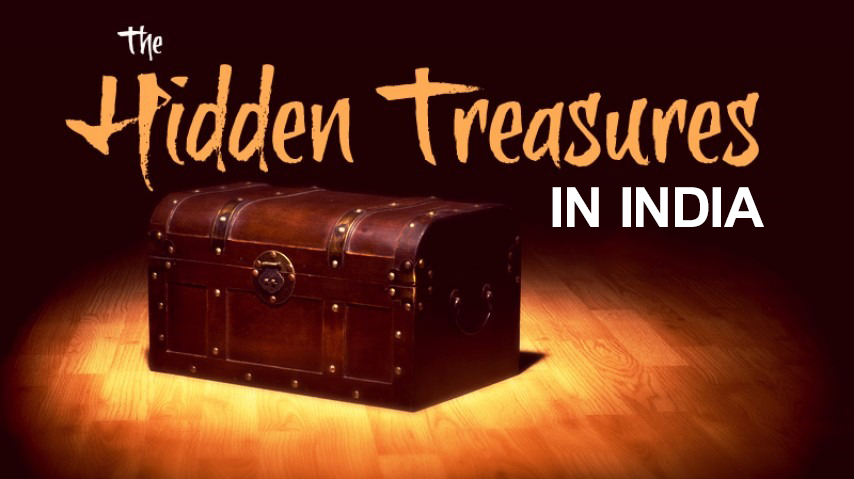 These 9 hidden Treasures in India are not only about Money and Gold as you think but only 1% is about them and the rest of them are different Treasures. Some of these may even lead to the death of millions of people and in the near future there going to come under the limelight. By getting to know about each treasure world’s fate also will be changing. Treasure means not only money and gold but which is very valuable that can be hidden, which only will get for the right person and which is useful for the future. These Hidden Treasures in India are very different and quite unique which will blow your mind.
Here we go:

This treasure includes gold, diamonds, ornaments, and pearls which estimates and equal to 5 times the total value of the money available in the world right now. With that money, we can even buy 5 planets the same as Earth that is the value of the treasure. When we get the treasure out India will be Financially number 1 in the world.

At one point in time, India has more knowledge than any other country this knowledge is stored in Ancient books and hidden. When Alexander The Great came to conquer India He took away all the Ancient books with him to his country to make his people know about the greatness of these books and to his country in top position in the world. When these ancient books are stored in Cleopatra library, Julius Caesar Burnt all Those Ancient books of India. Just think that alexander besides all the money and wealth he only took these ancient books you can imagine the value of those books. There is everything in those books like all the technologies, sciences and skillsets are available.

We know Solids, Liquids and Gases are only 118 elements. With this treasure of India, we can get elements that are available in other planets also. In this treasure, we will come to know about Magic objects like shamanthakamani, Water is a universal solvent we know but some oils don’t mix with water, we may know more liquids which are solvable with every other element. When we get to know about new elements there will be new inventions taking place. Let us wait for them to discover the hidden treasures in India.

Mantra Tantra Yantra People think these 3 are the same but it is wrong they are different from each other. Mantras are like formula with a code language, The experiment we do with the code language is Tantra. The energy we produce using mantras is called Tantras, The place where we preserve energy which has the capacity is Yantra. We can get all these Mantra Tantra Yantra in one of the Hidden Treasures In India.

We saw about hidden powers in many stories and movies. For example, Genie in Aladdin, Bethal in Vikram Bethal story are popular hidden powers we know. Basically, these powers don’t get too selfish people, people who are good at heart and how to help others will get these powers. These Hidden Powers have the capacity to change the world easily.

You can see this type of gateways in Doctor Strange movie and End Game Movie. All the dead people will come out in a place from these gateways. From Hidden Treasures In India, we get more powerful Gateways than those in the movies. With these Gateways Teleportation, Time Travel, traveling to other planets we can happen in seconds. there will be no traveling time and we don’t even use vehicles to travel also no pollution.

This is a powerful treasure, India will rule the world when you get to know about this treasure. We can get over with dreadful diseases like Diabetes, Cancer, AIDS, and others with medicine treasure.

We can get all the high-end weapons which we can’t imagine from this hidden treasure. These weapons can even win nations with those powers.

these are all the Hidden Treasures In India which are not yet found. I have added these details by reading many books and assumptions. Hope you like it, Do comment here which Treasure excited you the most.