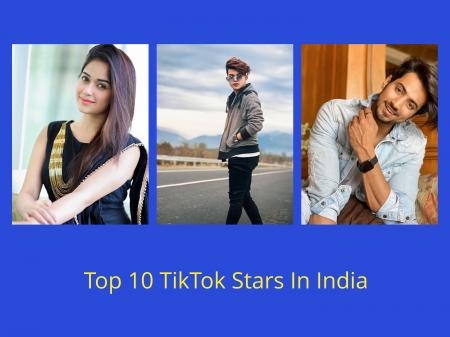 We are here, to present you with the list of Top Ten TikTok Stars from India. Before moving on to the list; let us discuss why people are getting fond of this application? It is so because, in this competitive world everybody wants to earn money, fame, and popularity and at the same time wants to enjoy their work. No doubt everybody earns money, but they lack themselves from enjoying their work, which often leads to depression. Here, TikTok Application has emerged in providing its users to satisfy their self-esteem needs, self-actualization needs, and psychological needs which is good for anyone to build up their self-confidence.

This app has given every common people a platform to showcase their acting skills even without being professional. Tiktok is one such app that contains all its users to present their culture and its diversity. This is why people across the globe from all age groups are putting up their unique content and presenting them in front of the world so that their work is appreciated and liked by everyone.

Some users are making millions of followers in this application on a daily basis and have become its top users. So, here are Top Ten TikTok Stars from INDIA who may not have a fan base like the real TV actors but also no less than the celebs:

Riyaz Aly is a popular Indian TikTok Star, Actor, and Model. He became famous for making lip-sync videos on TikTok and has also appeared in a few video songs like ‘Yaari Hai’, ‘Pahadan’, ‘Superstar’, ‘Daily Daily’ etc. He has the highest fan following on TikTok in India. Riyaz has over 36.5 million followers and 1.6 billion likes on his videos.

Faisal Sheikh is most famous by the name Mr. Faisu. He is an Indian TikTok Star, Fashion Influencer, and Model. He is well known for making Lip-Sync Videos on TikTok. Mr. Faisu’s fan base is huge on different social media platforms. Recently he was seen in a video song ‘Nazar Na Lag Jaye’ with Team 07 members. He was also seen in the song ‘Viah Ni Karauna’ and ‘Yaad Piya Ki Aane Lagi’.   Mr. Faisu has become very famous among the Indian Audience, and people love his videos on TikTok and YouTube. He mostly makes videos with his two friends Adnan Shaikh and Hasnain Khan.

Mr. Faisu was born on 5th October 1994, in Mumbai, Maharashtra, India. He grew up in Mumbai and got his early education from IES English School, Mumbai. He obtained his Bachelor’s Degree from Rizvi College. He is 26 years old (As In 2021).

Arishfa Khan is an Indian Actress. She came into the limelight of people when she started her career in the television industry with the role of Gunjan, in STAR PLUS SHOW, EK VEER KI ARDAAS………. VEERA   in 2012.

Arishfa Khan was born on 3rd April 2003 ( age 18 as of 2021) in Shahjanpur, Lucknow, India.  Her nickname is Arshu. She is pursuing her education at Ryan International School, Mumbai. Arishfa is born into an ISLAMIC FAMILY. She has a sister, ARISHFA KHAN. Her family shifted to Mumbai when she was only 5 years old. She spent her childhood in Mumbai. She has also worked in various television serials and commercials. She is also YouTuber wherein she uploads her dancing videos on her channel ‘ ARISHFA KHAN OFFICIAL’. She is an active social media influencer. Arishfa is a best friend with Lucky Dancer.

Jannat Zubair is an Indian Film and Television Actress, Model, and TikTok Star who is well known for making lip-sync videos on TikTok. She started her career in 2009 but came into the limelight through Colors TV’s Phulwa in 2011.  In 2018, she was seen in the Bollywood film Hichki, Where she played a student. She also has appeared in a few video songs like Ishq Farzi, Aeroplane, Fruity Lagdi Hai, etc.

Jannat Zubair real name is Jannat Zubair Rahmani. She was born on 29th august 2002 in Mumbai. Her Zodiac Sign is Virgo.  She did her schooling at Oxford Public School, Kandivali West, Mumbai. She belongs to a Muslim Family. Her Father, Zubair Ahmad Rahmani is an Actor. She has a brother who is also a TikTok Star named Ayaan Zubair Rahmani.

Jannat Zubair is very popular in India and has a huge fan following. She has over 24.3 million followers on TikTok and her videos are liked 608.4 million times.

Awez Darbar is an Indian TikTok Representative, Content Creator, Influencer, and Stereographer.  In fact, he is one of those creators who have shown immense talent in TikTok.  Because of which his fan following is increasing day by day. He was born on 16th March 1993 and did his schooling at St. Stanislaus High School, Bandra, Mumbai. He completed his graduation from the University of Mumbai, Maharashtra.

He has even earned the valuable title of crowned TikTok Comedian. He has many followers on Instagram, TikTok, and YouTube. He in fact through his attractive personality has gained lots of love from his social influencer.

Nisha Guragain is an Indian Tiktok Star who became famous for his lip- sync videos on TikTok. Nisha Guragain gained huge Popularity from her video song ‘MUJHE YAAD AATA TERI WO NAZREIN MILANA’. This video went on to get 3 million likes on TikTok.

Nisha Guragain was born on 2nd October 1997 in Mumbai, Maharashtra in a Hindu Family. Her Nickname is Angle Nishu. She is very beautiful and known for her cute smile. Her profession is making TikTok videos. She loves to make videos on social media. She is 23 years old as of 2021. She did her schooling at Mumbai private School after that she completed her graduation from Mumbai University.

She has over 24.1 million followers on TikTok and her videos are liked 630.1 million times.

Sameeksha Sud is the name of an Indian actress and a model, which is famous for comedy video clips, dance videos, and performing lip-sync on Tiktok. She made her acting debut with the TV serial ‘Baal veer’ in 2012. She has also earned the precious badge for being an ace TikTok Comedian. She is also better famously known for her group ‘Teentigada’. Vishal Pandey and Bhavin Bhanushali are also part of this group.

Sameeksha was born on 25th April 1991 in Mumbai, Maharashtra, India. She did her schooling at Mumbai Private School and completed her Diploma in Computer Science. Sud is very beautiful with an acute smile, style, and attractive personality. She is Taurus by Zodiac Sign.

She has a huge fan following of 21.9 million followers in TikTok and her videos are liked by 943.2 million times and she is in the 7th position among the top ten TikTok stars in India.

Avneet Kaur is an Indian Television Actress and a well–known dancer. It is so because she was first seen in DANCE INDIA DANCE LI’L MASTERS in 2010. Apart from this, she is also known for her amazing Lip-Sync Videos in the famous TikTok App. She is famous from her Childhood as she is being categorized as a child artist since 2010. She participated in many TV reality shows as well as movies.

Avneet Kaur was born on 13th October 2001, in Jalandhar. She has been grown up learning all the skills required to be an actress since her childhood and has emerged as a popular actress today. Currently, she was seen as a lead actress as Princess Yasmine in SAB TV’S ALADDIN NAAM TOH SUNNA HOGA Opposite Siddharth Nigam.  She is now considered the most versatile, talented, and at the same time most popular actress at this young age.

She has 20.8 million followers on TikTok and 493.5 million likes and she has got 8th position among the Top Ten TikTok Stars in India.

Garima Chaurasia (Gima Ashi) is better known as bohot hard Girl on TikTok. Garima along with her friend Rugeesvini Created a video on Emiway Bantai’s Machayenge song and the video took the internet by storm making Garima Chaurasia a star overnight. She is a model and a popular social media influencer. Gima is also known for her looks, sweet smile, and awesome personality.

She was born on 28th August 1996, in Delhi, India in a Hindu family. As of 2021, she is 25 years old. Her zodiac sign is Virgo. Garima is a Fashion Blogger and a crowned Muser on TikTok. She is also featured in small music videos.

She has a huge fan following in TikTok and has earned 19.4 million followers and 555.9 million likes and she is in 9th position among the top ten TikTok stars in India.

Lucky Dancer’s real name is Arhan Khan. Lucky dancer is a young Indian Dancer, model, and Influencer. He is famous for his TikTok Videos and he is in the 10th position among the Top Ten TikTok Stars from India. He was born on 4th September 2001 and his age is 20 years old (as of 2021). Lucky belongs to New Delhi, India. His zodiac sign is Virgo. He was born into a Muslim family. His sister’s name is Tanya Khan and his brother’s name is Salman Khan. He completed his schooling in Mumbai, Maharashtra.

At the age of 14, he started uploading online videos and content. Lucky at a very young age gained popularity and fame. He also has his own Dance workshop where he teaches dance to everyone. He has a group of dancers titled Team Nawab. Besides dancing, he is also a gym lover and he focuses on building his body. The actor is quite famous among the audience for his looks and hairstyle.

He has a very huge fan base following 16.9 million which is likely to grow and has over 698.8 million likes over his videos on TikTok.

So, we discussed the list of Top Ten TikTok Stars in India, I hope you liked the information provided by us.