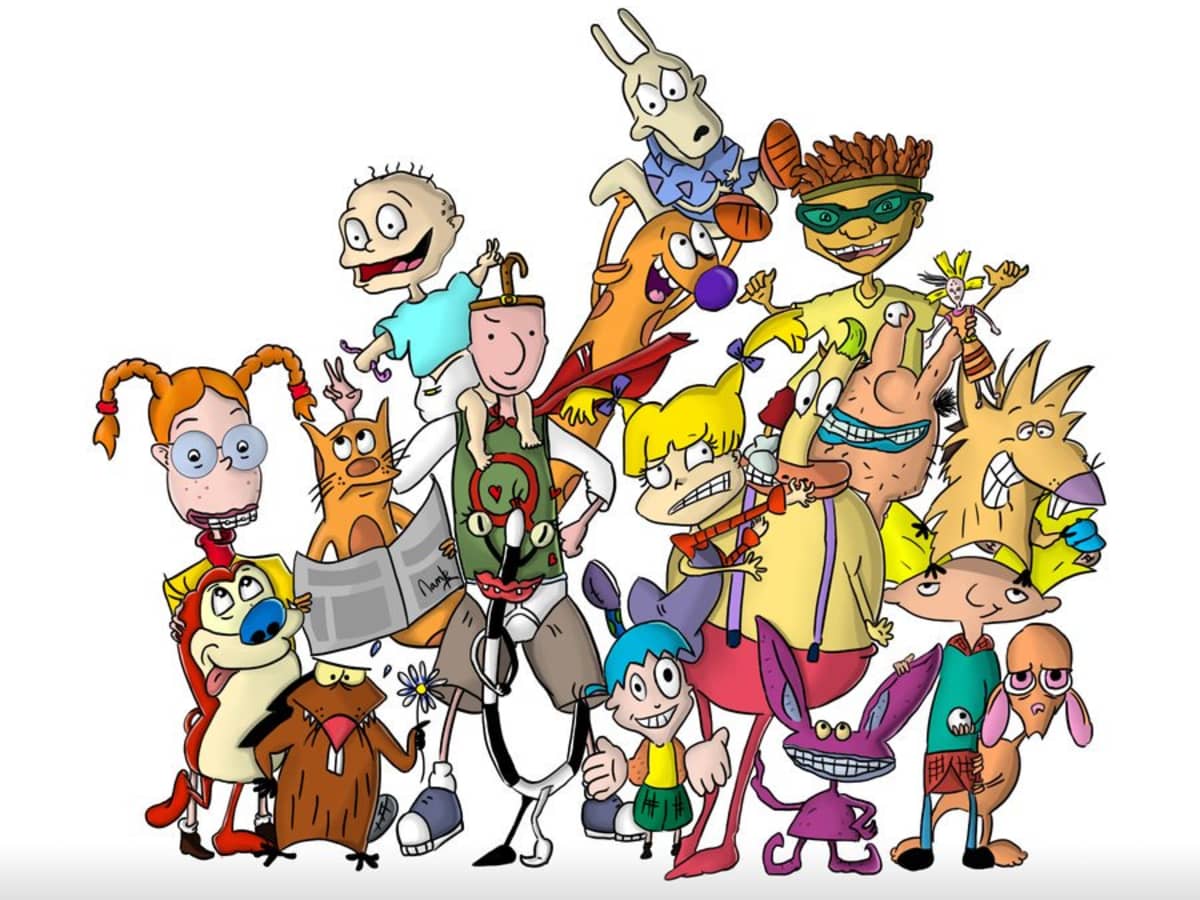 All-Time Cartoon Heroes: Although the cartoon industry has been blooming for the last 4 decades, the early 2000s produced one of the finest cartoon characters and heroes. Generation Z and Alpha definitely love these cartoon heroes and characters because they have watched them. However, this article is going to share these memories again.

Indeed, this article presents one of the best and all-time cartoon character heroes from the early 2000s. Here we go:

Here is a thorough list of all-time cartoon character heroes from the early 2000s, but keep in mind, we are not ranking.

Pokémon is a world-famous animated cartoon series of Japan that aired its first episode in 1997. But due to global acceptance and high TRP, the show is still being watched in different regions of the world in local languages. Although this comprises many heroes like Pikachu, Misty, and Iris we are presenting Ash as the cartoon character hero of this show.

Definitely, Ash Ketchum has a primary role in this cartoon series who wants to be a Pokémon master. This 10-year-old Pokémon trainer is ambitious to complete all challenges to attend Pokémon League Conferences. Kids love to watch him conduct different ventures with friends Misty, Goh, Brock, and Chloe.

2000s kids also like to watch family cartoon series, and The Proud Family is also one of these shows. This is an American animated show of Disney that is about a 14 years girl named Penny Proud and her family. Yes, she lives in California with her brother, parents, and sister.

Although Penny is pretty and an extrovert kind of girl but wants to live her dreams but her parents show some restrictive behavior towards her. But fortunately, she always reacts like an obedient daughter and respects the orders of her parents. Her leadership and problem-solving capacities are also worth watching. For sure, it could be an excellent show for kids of all ages.

Dragon Ball Z is one of the top-rated Japanese cartoon series that started in 1989. But because of its appealing concept and content, kids of the early 2000s have been watching it for years. The lead cartoon character of this series was Son Goku, who was a brave fighter.

Yes, Goku always fought for justice and to safeguard Earth and humanity from different threats and Saiyan Warriors. With 122K reviews, IMDb also gave an 8.7 rating out of 10 to this cartoon series because of its worldwide fame.

If you love to watch comedy cartoon series, you must consider Ed, Edd N Eddy. Yes, I am talking about another appealing cartoon character hero Eddy. He was the unannounced leader of this show who looked arrogant, immature, loudmouth, and greedy in his yellow bowling shirt and blue jeans. But in reality, he wants appreciation from everyone.

Originally, this cartoon show was aired from 1999 to 2008, but it is not the favorite cartoon character hero of generation Z, interestingly, generation alpha is also crazy to watch it. Yes, it is also available on Netflix.

Jackie Chan is a popular cartoon character hero who is known because of his action and bravery. Although this cartoon show sounds like a Chinese series, it is actually an American animated series that aired its first episode in September 2000.

In this cartoon show, Jackie Chan is a 35 years old solid and modest man who is an archeologist by profession and a skilled martial artist. He lives in San Francisco with his uncle and starts working as an agent for Section 13 to conduct different intelligence-based operations.

With 9.3 ratings out of 10, Avatar the Last Airbender is also a popular cartoon show of the 2000s, and Aang is the protagonist of this series. This cartoon character was born in 12 BC during a conflict. Around 4 different nations had disputes in this cartoon show, and after the Hundred Year War, Aang tried his best to uphold peace in the world.

Personally, Aang is a lovely soul with a good sense of humor. He performs his duties as an Avatar very well but wants to get rid of this restricted world. Surely, because of different storylines and cultures, many cartoon characters are considered heroes, including Zuko and Katara.

Jack is another fantastic cartoon character hero from the early 2000s. Yes, we are discussing one of the top-rated shows of Cartoon Network, Samurai Jack. Or probably, it is also known as Jack the Samurai. This cartoon hero was basically a Japanese Samurai prince who fights against a black magician Aku.

If we talk about the personality of this cartoon character hero, then he is a generous soul who is always ready to help people in need. However, you can also witness changes in his personality in season 5 when he tries to convince Aku’s daughter Ashi.

Justice League is another one of the best American cartoon series from the early 2000s. This show aired on Cartoon Network from 2001 to 2004 and presented numerous superheroes. However, we are only discussing Batman as a cartoon character hero from this series.

The original name of this cartoon hero was Bruce Wayne, who had a wealthy background. But under the mask of Batman, he is always ready to fight against unjust and social discrimination. He is also shown as the founding superhero of the Justice League.

Teen Titans is not only a memorable show for generation Z, but the alpha generation always likes its characters and concept a lot. Like other cartoon series, viewers also watched various heroes in this show, but we are picking Robin as the protagonist here.

Though Robin hadn’t owned any superpower like other superheroes, the training of Batman made him very tough. You can also call him a natural-born and the noble hero who is always ready to protect the city from destroyers. Moreover, his chemistry with friend Starfire.

Courage the Cowardly Dog is another worth-watching cartoon show from the early 2000s, but this time, we are not nominating any human cartoon hero here. Indeed, we are awarding Eustace Bagge and Muriel’s pet dog Courage as a hero this time.

This pink, small, and cowardly dog always tries his best to safeguard his family from unwanted disasters and threats. His master Eustace never loved him, but he always tried to protect Muriel. The most common lines of this cartoon hero are, “Muriel! I’ll save you!” and “What have you done with Muriel?”.

In short, this article presents one of the famous and attractive all-time cartoon character heroes from the early 2000s. Few of them belong to very serious, and sci-fi cartoon series but some of them are lovely and handle situations in a very gentle and funny manner.

Adult Swim is known to air one of the best cartoon shows for adult viewers, and Aqua Teem Hunger Forces are also one of them. With 24k IMDb reviews, it is also commonly called abbreviated as ATHF. Instead of human lead, all heroes of this cartoon show are food items, and Master Shake is the lead character.

This cartoon character looks like a white cup with a straw. Personally, he is arrogant and careless but can perform good things with friends Meatwad and Frylock.

Martin Morning is another good cartoon show that has been airing since 2003. The main character of this show is Martin, and you can also consider him a hero of this series. Martin is basically a nine years old boy who wakes up early in the morning with strange transformations, but his goal is to achieve normality in his life.

By the way, recent kids, generation Alpha, and Z, equally love to stream this French cartoon series. You can watch it on France 3, Clan TVE, ABC Kids, and Cartoon Network.

Cartoon fans who like to watch fantasy, fiction, and fairy shows must be fans of Winx Club. It is not an old-fashioned cartoon series because it has been streamed from 2004 to 2019. Even its recent seasons have been broadcasted in 3D models. However, if we talk about this show’s all-time favorite cartoon character, then we will name ‘Bloom’.

Bloom is a guardian fairy and princess of Domino. Yes, as a founder of Winx Club, she protects the people with her magical power. It definitely could be a favorite of teen and preteen girls.

Again, it is significant to share that we haven’t ranked them, so don’t judge their popularity and character’s appeal. Indeed, all of these are the best in their departments.